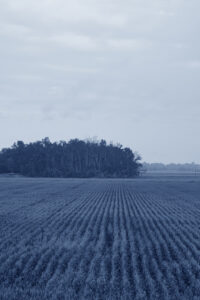 These images represent a continuation of different approaches to looking at our California Delta region.

The first group is from a series titled “One Hundred Famous Views of the California Delta”. The format refers to a tradition used in Japanese Woodblock series in the 1800s. These prints would often show famous scenic views along important highway routes or within cities like Edo (ancient Tokyo). The series were released by publishers as individual prints and often ran to over a hundred images, depe

nding on how popular the series became with the public. The artists, such as Hokusai and Hiroshige, also became famous due to their prints.

The photographs in this exhibit are a selection from a series of something over one hundred views of the Delta. They are about the same size and format (oban) as the woodblock prints, and also have a stylized border referring back to the traditional prints. The images in this series represent the variation in landscapes and human influences currently playing out within the delta boundary.

The second series is made up of small format photographs printed in monochrome. These reference an early style of Japanese woodblock print known as azuri-e, meaning “blue print”. These early prints were simpler to produce than the later multicolored prints, since they could be printed from a single block. They were printed in a reddish or blue ink. The cyan color in these photographs attempts to relate to the mood of the scene when the image was taken.